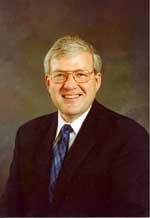 Dr. Roger L. King, will talk about Semantics-Enabled Framework for Knowledge Discovery from Earth Observation Data Archives. Earth observation data has increased significantly over the last decades with satellites collecting and transmitting to Earth receiving stations in excess of three terabytes of data a day. This data acquisition rate is a major challenge to the existing data exploitation and dissemination approaches. The lack of content and semantic based interactive information searching and retrieval capabilities from the image archives is an impediment to the use of the data. Dr. King will describe a NASA funded framework being developed at Mississippi State University that is built around a concept-based model using domain-dependant ontologies. In this framework, the basic concepts of the domain are identified first and generalized later, depending upon the level of reasoning required for executing a particular query. They employ an unsupervised segmentation algorithm to extract homogeneous regions and calculate primitive descriptors for each region based on color, texture and shape. They initially perform an unsupervised classification by means of a Kernel Principal Components Analysis (KPCA) method, which extracts components of features that are nonlinearly related to the input variables, followed by a Support Vector Machine (SVM) classification to generate models for the object classes. The assignment of concepts in the ontology to the objects is achieved automatically by the integration of a Description Logic (DL) based inference mechanism, which processes the interrelationships between the properties held in the specific concepts of the domain ontology. The framework is exercised in a coastal zone domain.

Dr. King is a William L. Giles Distinguished Professor in the Department of Electrical and Computer Engineering at Mississippi State University (MSU). His research areas include the intelligent analysis of Earth remote sensing imagery for a variety of decision support activities. He joined MSU in 1988, where he now serves in a multitude of roles that are all centered on the use of remote sensing and geospatial technologies - Associate Director for Research in the GeoResources Institute, Director of the Computational GeoSpatial Technologies Center, and as the Director of the US DOT funded National Consortium on Remote Sensing in Transportation - Environmental Assessments. He recently completed a one-year IPA assignment at NASA Headquarters serving as a senior technical and policy advisor in the role of Chief Technologist for the Earth Science Enterprise Applications Division. He also has served as a member of the NASA Earth Science Information Systems and Services Subcommittee of the Earth Systems Science and Applications Advisory Committee. He has also been nominated to be a lead author for the Climate Change Science Program Synthesis and Assessment Product 5.1, Uses and Limitations of Observations, Data, Forecasts, and Other Projections in Decision Support for Selected Sectors and Regions.

Dr. King is very active in the IEEE Geoscience and Remote Sensing Society (GRS-S) where he serves as the Chair of the Technical Committee on Data Archiving and Distribution and as a member of the IEEE Committee on Earth Observations. He is the IEEE GRS-S liaison to the International Standards Organization (ISO) Technical Committee on Geographic Information/Geomatics (TC211) and the IEEE-USA Committee on Transportation and Aerospace Technology Policy. He has received numerous awards for his research including the university's top research honor - the Ralph E. Powe Research Award; being named a member of the Academy of Distinguished Alumni of the Department of Computer Science and Electrical Engineering at West Virginia University; and a recipient of the Department of Interior's Meritorious Service Medal. Dr. King received his BSEE from West Virginia University (1973), his MSEE from the University of Pittsburgh (1978), and a Ph.D. in Engineering from the University of Wales - Cardiff (1988). Dr. King is a registered professional engineer in the state of Mississippi.