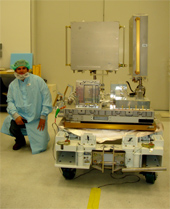 The GSFC SpaceCube, a compact reconfigurable high-performance processing platform, was successfully flown as part of the Relative Navigation Sensors (RNS) system, a payload on the STS-125 Hubble Space Telescope (HST) Servicing Mission 4. The main objectives of RNS were to record images of HST during the mission and prove real-time tracking capabilities. SpaceCube was responsible for a variety of RNS tasks including avionics control, two real-time image processing algorithms for position and attitude estimation, command and data handling, camera automatic gain control, JPEG2000 image compression, and Space Shuttle Ku-band interfacing. This presentation will feature how the SpaceCube enabled all RNS objectives. This presentation will also highlight various other SpaceCube projects and technology advances. In particular, GSFC is sending another SpaceCube to the ISS as an experimental processing platform. Two new versions of the SpaceCube are also in the works. The first is targeted for small-scale missions like sounding rocket avionics. The second is targeted for long-term missions requiring high reliability like those of the Earth Science Decadal missions.

Dan Espinosa started working at Goddard as an intern in 2003. He is currently a member of the Embedded Processing group within the Science Data Processing Branch (Code 587) and a member of the SpaceCube 2.0 development team. He has a BS in Computer Engineering and a MS in Electrical Engineering from the University of Florida.

Dan’s area of expertise is in reconfigurable high-performance embedded systems that utilize Field Programmable Gate Arrays (FPGA) for on-board data processing. Dan assisted with FPGA development for the SpaceCube for the Relative Navigation Sensors, a HST SM4 payload. Dan was also the lead Xilinx FPGA developer for the SpaceCube Demonstration Platform set to launch on STS-129 as part of MISSE7 to the space station that will serve as a NASA test bed for radiation mitigation strategies.