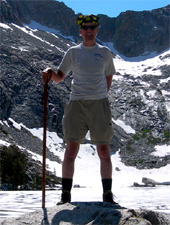 In 1966-67 NASA sent 5 spacecraft to the Moon to perform reconnaissance of potential landing sites for the Apollo missions. Lunar Orbiters I-III, flying in a near equatorial orbit, photographed the majority of the lunar near side equatorial region with a resolution of approximately 1 meter in the visible band. Lunar Orbiter IV and V, flying in a polar orbit photographed 98% of the Moon at resolutions varying from 2-100 meters. During the time of the missions, the world never saw the full glory of the images from Lunar Orbiter. Forty two years later the Lunar Orbiter Image Recovery Project (LOIRP) was funded by NASA Headquarters to provide a proof of principle to recover the full resolution images from the original undemodulated analog tapes. This required extensive research for documentation from the original missions as well as reconstruction of the last surviving Ampex instrumentation recorders of that period. In addition, demodulators for reconstructing the analog data were recreated from fragmentary documentation, by retired experts from the television industry. The process and the results obtained will be outlined in this presentation.

Dennis Wingo is an engineering physicist and 31-year veteran of the computer, academic, and spaceflight communities. Dennis has designed and built flight experiments flown on sounding rockets, the Shuttle, ISS, as well as small satellites. Dennis has worked with MSFC on solar power satellites and Langley on large space structures. Dennis has also worked with DARPA on the development of large space telescopes. Dennis holds two patents for orbital space operational concepts and has published a book (Moonrush) concerning the use of ISRU for a cost effective, commercial, return to Moon. Dennis is the CEO of Skycorp Incorporated, a commercial space company working on advanced space concepts, and is also the CEO of Green Trail Energy Inc, a company devoted to the rapid implementation of solar power solutions for commercial and government customers on the west coast. Dennis is also a founder of Orbital Recovery Corporation/Orbital Satellite Services AB, the world's first commercial on orbit spacecraft servicing enterprise. Dennis is Currently leading the Lunar Orbiter Image Recovery Project (LOIRP) at the NASA Ames Research Park, funded by NASA's Exploration Systems Mission Directorate.