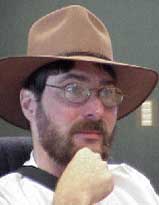 Dr. Jim Coplien, will talk about Software Patterns. The architect Christopher Alexander crystallized an important understanding about building design in the 1970s and 1980s: the greatest, most useful and most beautiful buildings can not be built from pre-manufactured parts, nor can they be built by any method of "master planning." Instead, systems must be built piecemeal in an incremental process of growth and refinement. Several leading software designers recognized Alexander's truths in the emerging software practices of the 1990s and borrowed these ideas in what are now known as software pattens.

In this presentation, Dr. Coplien will describe software patterns as they are being used on large projects, particularly in telecommunications, in a way that was initially intended and which goes far beyond the Design Patterns of the object-oriented community. The key ideas of this technique are pattern languages that capture timeless practices of a given discipline and integrate them into a system understanding, a process of adaptation in software development, and a deep appreciation for the human element and community in the act of design.

Dr. James Coplien is an associate professor of Computer Science at North Central College in Naperville, IL. and is a Visiting Professor at the University of Manchester Institute of Science and Technology. He holds a B.S. in Electrical and Computer Engineering, and a M.S. in Computer Science from Vrije Universiteit Brussel. His early career work includes applied research in software development environments, version and configuration management models, and in object-oriented design and programming.

Prof. Coplien is author of C++ Programming Styles and Idioms, a landmark C++ book, and of Multi - Paradigm Design for C++. He is co-editor of two volumes of Pattern Languages of Program Design. He is a Member Emeritus of the Hillside Group, a small consortium of industry leaders providing industry- wide leadership and support in the pattern discipline. Coplien was program chair of ACM (Association for Computing Machinery) OOPSLA (Object-Oriented Programming Systems, Languages and Applications) ‘96 and program co-chair of the First International South Pacific Conference on Pattern Languages of Program Design.