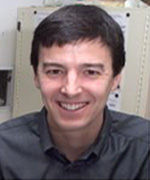 Dr. John Rogers, will talk about Electronic Paperlike Displays. Low cost electronic displays that have the look and feel of conventional printed-paper will dramatically change the way that we use and interact with laptop computers, personal digital assistants and cellular telephones. They will also fundamentally alter our notions of newspapers, magazines, greeting cards, and even cereal boxes, bumper stickers and wallpaper. These electronic paper displays are radically different than traditional systems, which rely on cathode ray vacuum tubes or liquid crystals with silicon-based circuitry on plates of glass. Electronic paper is a thin, high contrast, reflective display that can be flexed, bent, rolled-up and folded. Dr. John Rogers will present some of the recent work in this area, with a focus on the printing techniques and materials for active matrix backplane circuits for these types of displays.

Dr. John Rogers is the Director of Condensed Matter Physics Research at Bell Laboratories. His current interests include new methods for micro- and nano- fabrication, plastic electronics, soft materials for photonics, high-frequency acoustics and active optical-fiber devices. Dr. Rogers obtained BA and BS degrees in chemistry and physics from the University of Texas, Austin, in 1989. His graduate work was done at the Massachusetts Institute of Technology under a National Science Foundation Fellowship. He received SM degrees in physics and chemistry in 1992 and a PhD degree in physical chemistry in 1995, all from MIT. The picosecond laser ultrasonic methods that Rogers developed during his PhD research were commercialized through a successful start-up company, Active Impulse Systems, Inc. (AIS) that he co-founded in 1995. In 1998 Philips acquired this company, in whole. From 1995 to 1997, Rogers was a Junior Fellow in the Harvard University Society of Fellows. During this time he served as a Director for AIS and conducted research in the laboratory of G.M. Whitesides. Dr. Rogers has published more than 85 papers and is an inventor on over 60 patents and patent applications, more than 30 of which are either licensed or in active use. He was selected as one of the nations top 100 young innovators for the 21st century by MITs Technology Review magazine in 1999 and was awarded a similar honor by the National Academy of Engineering in 2000. His work with electronic paper received the American Chemical Societys Team Innovation Award, an R&D100 award, and R&D Magazines Editors Choice for the Best of the Best new technology for 2001. He was also recently named the 2001 Robert B. Woodward Scholar by the Department of Chemistry and Chemical Biology, Harvard University.