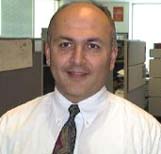 Dr. Moji Ghodoussi, will present Telesurgery / Telemedicine. Minimally invasive surgery (MIS) was pioneered in the late 80's. MIS provides reduced trauma and pain for the patients, which have been the driving factors behind its adoption. On the other hand, the complexity of MIS procedures has slowed down its adoption in more complicated forms of surgery. Computer Assisted Surgery (CAS) in general, and robotics in particular are being used to solve this particular problem in surgery. The goal of CAS is to improve ergonomics and reduce the complexitiy of surgical procedures so that more open procedures can be converted to MIS, benefiting the patients. These tools include seated positions, motion scaling, hand tremor filtering, and immediate access to vital information, etc.

Introduction of robotics into surgery, also provides other possibilities that need to be better understood and taken advantage of. Such possibilities include telementoring and telesurgery and, taken one step further, tele teaching and tele collaboration. On September 7, 2001, using robotics surgical systems, the world's first remote Surgery was performed as surgeons in NY removed a patient's gallbladder in Strasbourg, France - a distance of 4,000 miles!.

From 1986 through 1991, his primary research involved kinematics and dynamics analysis and parameterization of open and closed kinematic chain robotic mechanisms at the Center for Robotic Systems in Microelectronics. Another area of his research was force control issues in particular, the hybrid position/force control and the impedance control methods of these kinematic chains. In addition, he analyzed their kinematic and dynamic redundancies and their optimization and won the IEEE Anton Phillips Best Five Paper of the Year Award. Through 1993, he worked at TRW-Astro Aerospace in California on the International Space Station's Mobile Transporter, analyzing the mechanism and designing a real-time motion controller for it. The transporter was successfully launched to space recently. At Computer Motion, since 1993 he has held various positions from Senior MTS working on all products, to managing the AESOP product development and productization, to department management. Dr. Ghodoussi has been a key member contributing to the direction of Computer Motion's product developments.