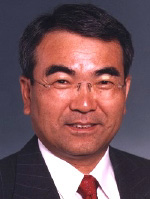 Goddard's Office of the Assistant Director for Information Sciences and Chief Information Officer announces the next GSFC Information Sciences and Technology (IS&T) Colloquium presentation of the Fall 2001 Series. Dr. Takeo Kanade, will talk about Computer Vision, Visual and Multimedia Technology, and Robotics. Is it possible to digitize a three-dimensional, time-varying scene from the world into a computer as a 3D event, just like real-time CT can digitize body volume? Then, not only could we render images from any viewpoint or angle - even those at which there were no cameras (the concept of "Let's watch the NBA on the court") but we could also conceive of a whole new notion of "event archiving and manipulation."

Since 1994, the Carnegie Mellon University's Virtualized Reality™ project has been developing computer vision technologies for this purpose with the 3D Room - a fully digital room that can capture events occurring in it by many (at this moment 50) surrounding video cameras, including pan/tilt heads. Dr. Kanade will discuss this theory, project facility, computation, and results. This project team recently worked for CBS Sports to develop a multi-robot camera system that was used to broadcast the Super Bowl XXXV(link is external) on January 28, 2001. The system, which CBS calls "EyeVision", produces a surrounding view of various interesting and controversial plays. Dr. Kanade will present the contribution to that real-time system and experience with it. If time allows, he will also cover briefly a few more topics, including face image analysis and vision-based autonomous helicopter flight.

Takeo Kanade received his Ph.D. in Electrical Engineering from Kyoto University, Japan, in 1974. After holding a faculty position at Kyoto University, he joined Carnegie Mellon University in 1980, where he is currently the U. A. Helen Whitaker University Professor of Computer Science and Robotics.

Dr. Kanade has worked in multiple areas of robotics: computer vision, manipulators, autonomous mobile robots, and sensors. He has written more than 200 technical papers and reports in these areas, as well as more than ten patents. He has been the principal investigator of a dozen major vision and robotics projects at Carnegie Mellon.

Dr. Kanade has been elected to the National Academy of Engineering. He is a Fellow of the IEEE, a Fellow of ACM, and a Founding Fellow of American Association for Artificial Intelligence. He received many awards, including C & C Award, Joseph Engelburger Award, and JARA Award.