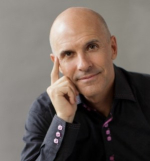 Jeff Jonas is an acclaimed data scientist who thrives on solving some of the world’s most complex business challenges. His systems extract useful intelligence from tsunamis of data. These systems tackle high-profile challenges including identifying potential terrorists and earlier detection of surprise asteroids, to name a few. In this presentation Jonas will draw on the familiar experience of putting a jigsaw together as a way to imagine how big data really comes together to improve predictions – albeit with a few catches: there are no box covers, many pieces are missing, there are duplicates, and some pieces are errors or worse – outright lies. Now, add to this, the “space-time-travel” data about how things move that are being created by billions of mobile devices and the Internet of Things – what becomes computable is outright amazing. Why is all this so important? The most competitive organizations are going to make sense of what they are observing fast enough to do something about it while they are observing it. After this presentation, you will never think about data again the same way.

Jonas is an acclaimed data scientist who thrives on solving some of the world’s most complex business challenges. His systems extract useful intelligence from tsunamis of data. These systems tackle high-profile challenges including identifying potential terrorists, detecting fraudulent behavior in casinos, connecting loved ones after a natural disaster, and earlier detection of surprise asteroids, to name a few.As Founder and Chief Scientist of Systems Research & Development (SRD), Jonas created Non-Obvious Relationship Awareness (NORA) – a sophisticated application which integrates diverse data sources allowing Las Vegas casinos to better understand with whom they were really doing business. This technology caught the eye of In-Q-Tel, the venture capital arm of the CIA, leading to one of two rounds of venture capital for SRD and ultimately led to IBM’s acquisition of SRD in January 2005. IBM continues to use NORA-class technology (now called IBM InfoSphere Identity Insight) to address world-class problems, e.g., early detection of fraud for a financial services company, saving them over $200M to date.Prior to July 2016, Jonas was an IBM Fellow and Chief Scientist of Context Computing. In this capacity, Jonas led a team focused on next-generation “context computing.” Code-named “G2,” this technology is being used in innovative ways, e.g., to modernize voter registration in America in a joint effort with Pew Charitable Trusts, which keeps voter lists up to date and registers more voters; helping the Singaporean government better protect the Malacca Straights (which carries half the world’s oil supply and one-third of the world’s commodity shipments) with a maritime domain awareness system.In August of 2016, Jonas announced the launch of his next start-up Senzing which will use G2 to democratize Entity Resolution — delivering affordable, accurate, real-time, Entity Resolution to the world at large.A highly sought after speaker, Jonas travels the globe discussing innovation, national security, and privacy with government leaders, industry executives, and think tanks. He is on the boards of the US Geospatial Intelligence Foundation (USGIF) and Electronic Privacy Information Center (EPIC), a Senior Associate at the Center for Strategic and International Studies (CSIS), and a Distinguished Engineer of Information Systems (adjunct) at Singapore Management University (SMU).