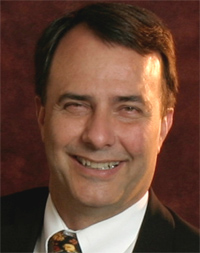 Progress and Prospects in Human-Agent-Robot Teamwork

Research and development for intelligent systems often takes an autonomy-centered approach. While this approach may be the best choice for situations where it is impractical or impossible for humans to provide close supervision of the intelligent system, it is not sufficient for the increasing number of applications that require close and continuous interaction among people, agents, and robots. In this presentation, I will discuss and demonstrate some of the challenges and requirements for successful coordination of joint activity in human-agent-robot teams.

Dr. Jeffrey M. Bradshaw is a Senior Research Scientist at the Florida Institute for Human and Machine Cognition (IHMC) where he leads the research group developing the KAoS policy and domain services framework. Formerly, he led research groups at The Boeing Company and the Fred Hutchinson Cancer Research Center. He has been a Fulbright Senior Scholar at the European Institute for Cognitive Sciences and Engineering (EURISCO) in Toulouse, France; an Honorary Visiting Researcher at the Center for Intelligent Systems and their Applications and AIAI at the University of Edinburgh, Scotland; a visiting professor at the Institut Cognitique at the University of Bordeaux; is former chair of ACM SIGART; and former chair of the RIACS Science Council for NASA Ames Research Center.

He served as a member of the National Research Council (NRC) Committee on Military and Intelligence Methodology for Emergent Physiological and Cognitive/Neural Science Research in the Next Two Decades and as a scientific advisor to the Japanese NEC Technology Paradigm Shifts initiative. He currently serves as an advisor to the HCI and Visualization program at the German National AI Research Center (DFKI), and an external advisory board member of the Cognitive Science and Technology Program at Sandia National Laboratories. He is a member of the Technical Committee for IEEE Systems, Man and Cybernetics, the IFIP Working Group on HCI and Visualization, and for the Aerospace Human Factors and Ergonomics of the IEA. Recently, he served as co-program chair for Intelligent User Interfaces (IUI 2008) and as Program Vice Chair, 2008 IEEE International Conference on Distributed Human-Machine Systems (DHMS 2008). He was co-chair for the 2009 Human-Agent-Robot Teamwork Workshop, co-located with the International Conference on Human-Robotic Interaction, and is the co-General Chair of the 2009 International Conference on Active Media Technologies (AMT).

Dr. Bradshaw serves on the Board of Directors of the International Foundation for Autonomous Agents and Multiagent Systems and is a member of the Parametric Human Consortium. He is on the editorial board of the Journal of Autonomous Agents and Multi-Agent Systems, the Web Semantics Journal, Schedae Informaticae, and the Web Intelligence Journal, and was formerly on the board of the Knowledge Acquisition Journal and the International Journal of Human-Computer Studies. He led the DARPA and NASA funded ITAC study team “Software Agents for the Warfighter” and has participated in NASA Blue Sky Study Groups for the “Human-Centered Vision of Mars Exploration” and for the “Small Pressurized Rover.” From 2002-2006, KAoS was used as part of a NASA series of annual two-week field tests of human-robot teams performing simulated planetary surface exploration at the Mars Desert Research Station in the Utah desert. Jeff was sponsored by DHS to undertake detailed simulation studies of the use of human-robot teams to secure facilities at Port Everglades. He has also led the ONR-sponsored NAIMT and Coordinated Operations projects where a team of humans and heterogeneous robots performed field exercises at the Naval Air Station in Pensacola, aimed at port reconnaissance, and robot-assisted detection and apprehension of intruders.

Among hundreds of other publications, he edited the books Knowledge Acquisition as a Modeling Activity (with Ken Ford, Wiley, 1993), Software Agents (AAAI Press/The MIT Press, 1997).