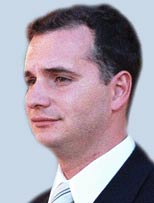 Dr. Luis Rocha will talk about Extraction and Semi-metric Analysis of Social and Biological Networks. Dr. Rocha will discuss the extraction of social networks from co-occurrence data in several electronic resources such as the World Wide Web, as well as the extraction of networks of genes and other biological entities from both gene expression experiments and collections of electronic documents. These associative networks are represented as weighted graphs whose edges denote degrees of proximity or its inverse, a distance function. Dr. Rocha will discuss how most distance graphs obtained violate the triangle inequality expected of Euclidean distances. This type of distance function is known as a semi-metric. We show that the semi-metric behavior of these distance graphs, can be used for identifying specific implicit associations in the graph, and thus useful to identify trends in communities associated with the sets of documents from where associations were extracted.

Dr. Luis Mateus Rocha received his Licentiate (5 year degree) in Mechanical and Systems Engineering (1985-1990): equivalent to Bachelors in Mechanical Engineering (1985-1988) and Masters in Systems Engineering (1988-1990) at the Instituto Superior Tecnico, Lisbon, Portugal. This period included a semester spent at the Staffordshire University, Stafford, England, under a European Union scholarship to attend the Masters Program in Industrial Engineering, with specialization in Computer Integrated Manufacturing (CIM). From June 1990 to December 1991 he worked as a Graduate Research Assistant at the Laboratorio Nacional de Engenharia Civil, Lisbon, Portugal where he participated in the design and development of the control system for a seismic table used to execute earthquake resistance tests. In January 1992 he started his studies with George Klir and Howard Pattee in the Systems Science department of the State University of New York at Binghamton, where he received his Ph. D in April 1997. In his dissertation he developed mathematical and computational models of complex evolutionary and cognitive systems with applications to Intelligent Information Retrieval and models of RNA Editing.

Dr. Rocha pursued his Ph.D. with a fellowship from the European Union and the Portuguese Government (1992-97). Since 1996 he has been a member of the Santa Fe Institute research community. He joined the Los Alamos National Laboratory in September 1997 as a Postdoctoral Associate. He was team leader of its Complex Systems Modeling Team during 1998-2000. Currently, where he is the leader of the Complex Systems Modeling Research Focus Area in the Modeling, Algorithms, and Informantics Group (CCS-3), and responsible for several research projects in Computational Biology, Artificial Intelligence, and Social Network Modeling. Rocha has published many articles in scientific and technologic journals, and has been the recipient of several scholarships and awards.