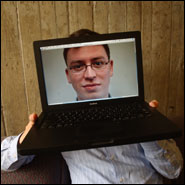 Luis von Ahn , will talk about Human Computation. Tasks like image recognition are trivial for humans, but continue to challenge even the most sophisticated computer programs. This talk introduces a paradigm for utilizing human processing power to solve problems that computers cannot yet solve. Traditional approaches to solving such problems focus on improving software. He advocates a novel approach: constructively channel human brainpower using computer games. For example, the ESP Game, described in this talk, is an enjoyable online game -- many people play over 40 hours a week -- and when people play, they help label images on the Web with descriptive keywords. These keywords can be used to significantly improve the accuracy of image search. People play the game not because they want to help, but because they enjoy it. The ESP Game has been licensed by a major Internet company and will soon become the basis of their image search engine.

He will describe other examples of "games with a purpose": Peekaboom, which helps determine the location of objects in images, and Verbosity, which collects common-sense knowledge. He also will explain a general approach for constructing games with a purpose.

In addition, Luis will describe his work on CAPTCHAs, automated tests that humans can pass but computer programs cannot. CAPTCHAs take advantage of human processing power in order to differentiate humans from computers, an ability that has important applications in practice.

The results of this work are currently in use by hundreds of Web sites and companies around the world, and over 100,000 people have played some of the games presented here. Practical applications include improvements in areas such as: computer vision, image search, adult-content filtering, spam prevention, common-sense reasoning, accessibility, and security in general.

Luis von Ahn is an assistant professor in the Computer Science Department at Carnegie Mellon University, where he also received his Ph.D. in 2005. Previously, Luis obtained a B.S. in mathematics from Duke University in 2000. He is the recipient of a Microsoft Research Fellowship, and was named one of Popular Science Magazine's "Brilliant 10" scientists of 2006. His research interests include encouraging people to do work for free, as well as catching and thwarting cheaters in online environments. His work has appeared in over 100 news outlets including The New York Times, CNN, USA Today, The BBC, and The Discovery Channel. Luis holds 4 patent applications, and has licensed technology to major Internet companies.
IS&T Colloquium Committee Host: Ben Kobler